Fashion Group’s greatest treasure is the Fashion History Slide Archives that are the largest and most comprehensive anywhere in our world.

Beginning with its charter members in 1930’s, with such women as Edna Woolman Chase, Dorothy Shaver, Claire McCardell, Elizabeth Arden, Helena Rubinstein, Carmel Snow and Eleanor Roosevelt, The Fashion Group has preserved its own history and made this Archive, the most authentic to be found in our industry.

Its records had been preserved in the original office headquarters in Rockefeller Center. The legacy continued in its subsequent location, the landmark Scribner Building, and in its present location, where this huge collection of slides and historic documents is organized and catalogued in the Fashion Group Archive Room. 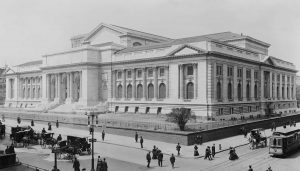 Because of the overwhelming number of files catalogued, The New York Public Library in New York City has acquired and catalogued most of the Archives, with the exception of the slides. They call it:

“the core of a Fashion Information Center serving the information needs of one of New York’s major industries.”

Found in their prestigious Special Collections, home for Rare Books and Manuscripts, are The Fashion Group’s printed materials and documents, collected over 6 decades, such as Newsletters and Trend Reports, transcripts of meetings, manuscripts, and original texts of reports and speeches by fashion industry leaders, social commentators, economists, writers, artists, political personalities and stars of the performing arts. They include:

Publications, bulletins and newsletters covering The Fashion Group events and personalities, reflecting the tempo of the times, the status of women, sociological trends and the state of the industry and the world.

Fashion trend reports dating back to 1931, starting with personal coverage of the French Couture by Edna Woolman Chase, then Bettina Ballard, then Jessica Daves of Vogue and Carmel Snow of Harper’s Bazaar.

Go to the Archive Room

Stay connected with us on social media to access the latest industry insights, news, and updates from our global network of professionals.

Join our global network to access professional connections across all industry sectors and a gateway to leading resources focused on the most current and crucial topics at the zeitgeist of innovation.